Who Was That Masked Man? 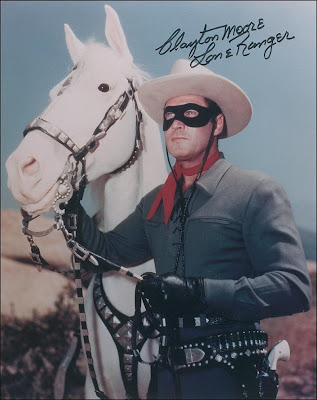 It’s the Spring of 1975 and I’m 16 years old. All day long at school I’ve been excited because today’s 4 o’clock movie  is THE LONE RANGER AND THE LOST CITY OF GOLD, one of two feature-length movies shot during the run of the long-running TV version of THE LONE RANGER! Plenty of time. School gets out at 3:30 and I only live 10 minutes away. When I arrive, however, I realize that for one of the rare times in my life I had forgotten my housekey! And there was no one else due home until 5:30!! As minutes tick away toward the movie’s starting time, I sit on the porch trying to think of friends whose houses I could race to and take over their TV. No one close enough. Darn it! Why today of all days? This was important! After all, it wasn’t every day one got to watch The Lone Ranger and Tonto in the mid-seventies!
So I did the only logical thing—I broke the back bedroom window and climbed in. Not the glass. The lock. I knew the mechanism on that particular window was old and barely attached anymore so I climbed up and just pushed and pulled relentlessly at the frame until the lock gave way. At that point I had less than five minutes to spare.
The movie wasn’t that good. It wasn’t even as good as the just plain old THE LONE RANGER that I had seen a few months earlier on the 4 o’clock movie. But that wasn’t important.  It was The Lone Ranger…and Tonto, too! 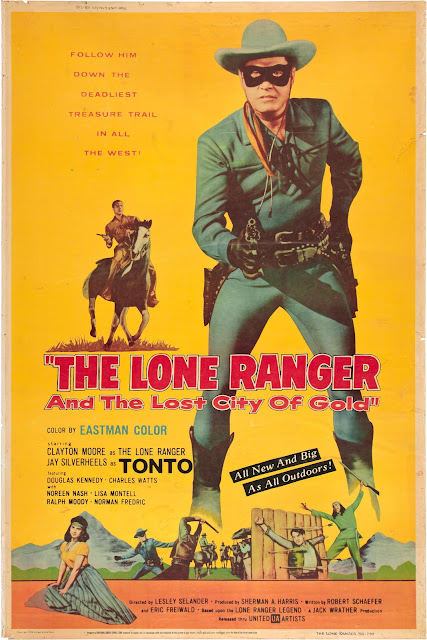 The premise behind The Lone Ranger was as simple as ABC…or in this case XYZ. That would be WXYZ in Detroit, the radio station owned by one George W. Trendle who, along with writer Fran Striker, conceived the cowboy hero who would become such an icon of American pop culture.
Originally a radio series starring, most famously, the wonderfully named Brace Beemer, our hero also appeared in early film serials as well as books, comics, pulps and, eventually, TV cartoons.
You had these Texas Rangers, see. And they were all killed…except one, making him the LONE Ranger. Get it? He was nursed back to health by an Indian—excuse me, a Native American—named Tonto. He put on a mask and swore to fight injustice. There were more details, naturally, but essentially that was it.
The details are found in the character’s famous Creed and Guidelines, as seen in various spots around the Internet. In fact, here they are again.
The Creed
"I believe...
That to have a friend, a man must be one.
That all men are created equal and that everyone has within himself the power to make this a better world.
That God put the firewood there but that every man must gather and light it himself.
In being prepared physically, mentally, and morally to fight when necessary for that which is right.
That a man should make the most of what equipment he has.
That 'This government, of the people, by the people and for the people' shall live always.
That men should live by the rule of what is best for the greatest number.
That sooner or later ... somewhere ... somehow ... we must settle with the world and make payment for what we have taken.
That all things change but truth, and that truth alone, lives on forever.
In my Creator, my country, my fellow man." 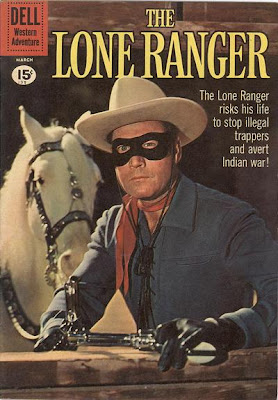 The Guidelines
The Lone Ranger is never seen without his mask or a disguise.
With emphasis on logic, The Lone Ranger is never captured or held for any length of time by lawmen, avoiding his being unmasked.
At all times, The Lone Ranger uses perfect grammar and precise speech completely devoid of slang and colloquial phrases.
When he has to use guns, The Lone Ranger never shoots to kill, but rather only to disarm his opponent as painlessly as possible.
Logically, too, The Lone Ranger never wins against hopeless odds; i.e., he is never seen escaping from a barrage of bullets merely by riding into the horizon.
Even though The Lone Ranger offers his aid to individuals or small groups, the ultimate objective of his story is to imply that their benefit is only a by-product of a greater achievement -- the development of the West or our Country. His adversaries are usually groups whose power is such that large areas are at stake.
All adversaries are American to avoid criticism from minority groups.
Names of unsympathetic characters are carefully chosen, avoiding the use of two names as much as possible to avoid even further vicarious association. More often than not, a single nickname is selected.
The Lone Ranger does not drink or smoke, and saloon scenes are usually interpreted as cafes with waiters and food instead of bartenders and liquor. 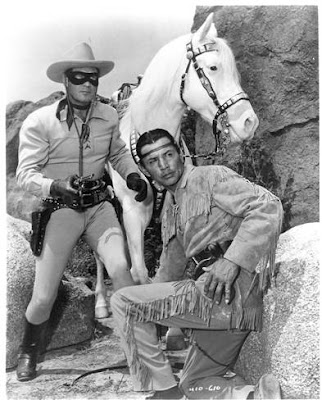 On radio, Brace Beemer made a stalwart hero, aided by John Todd as Tonto and I later years Fred Foy as the announcer who intoned the famous opening (which had several variations), “A fiery horse with the speed of light, a cloud of dust and a hearty Hi-Yo Silver! The Lone Ranger! ... With his faithful Indian companion Tonto, the daring and resourceful masked rider of the plains led the fight for law and order in the early western United States! Nowhere in the pages of History can one find a greater champion of justice! Return with us now to those thrilling days of yesteryear! From out of the past come the thundering hoof beats of the great horse Silver! The Lone Ranger rides again!” After this would come the stirring music of THE WILLIAM TELL OVERTURE, a classical piece now more associated with the masked man of the plains than with the Swiss bowman.
By the time television came along, though, the role went to Clayton Moore, a handsome actor with an amazing voice who was, ironically, best known for playing villains in Westerns and Gangster films and serials at the time. Beginning in 1949, Clayton Moore became The Lone Ranger. His impact was so big that he would remain The Lone Ranger for the rest of his life. In fact, the studio thought him easily replaceable when he asked for more money after the second season. After all, he was never seen without a mask anyway. They hired a bland actor named John hart to play the role for one season. Then they wisely gave Moore the raise he wanted to come back.

The pivotal role of Tonto, The Lone Ranger’s “kemosabe,” went to Jay Silverheels, a Canadian actor and later an Indian activist. The pair of them visually struck one of the most perfect looks in all of TV history.
Rounding out the series was Silver, a magnificent white stallion who quickly took his place alongside the great cowboy hero horses in pop history. Silver even had his own comic book!
The actual TV adventures were simple and somewhat formulaic with Moore often being given a chance to have fun in a secondary role as a doddering old prospector character the Ranger regularly used as a disguise. These were the only times the actor was seen without a mask on the series.
More important than the writing here, though, were the characters themselves, the Masked man and his faithful Indian companion, painlessly teaching concepts of justice, friendship and right and wrong to kids everywhere. 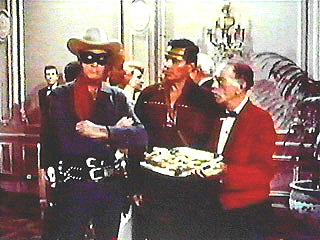 At the height of the show’s popularity, they made the feature film. THE LONE RANGER AND THE LOST CITY OF GOLD, however, was a lower-budgeted follow-up after the series had gone off the air after its eight season run.
Moore continued to appear as the Ranger in a few guest roles, in commercials (including famously with Silverheels in Stan Freberg’s mid-sixties pizza rolls ad) and in personal appearances. Like William Boyd before him, the actor had so thoroughly embraced the ideals of the iconic role that he , for all intents and purposes, became The Lone Ranger, never appearing in any other acting role again. 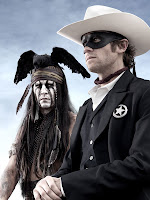 There was a big to-do over all that in the early 1980’s when the feature film THE LEGEND OF THE LONE RANGER was coming out and Clayton Moore was hit by a cease and desist order from the trademark holders, saying he had to stop wearing the mask in public. Moore, for a time switching to mask-like Foster-Grant sunglasses, stood up to them and his by then grown Baby Boomer fans backed him up as he took it to court! There were even petitions passed around about refusing to see the new movie. I signed one and have not seen it to this very day.
In fact, if someone passes one around I may sign one saying I won’t see the seemingly misguided new Disney version in 2012—the one with Johnny Depp’s Tonto wearing a bird on his head for no apparent reason. 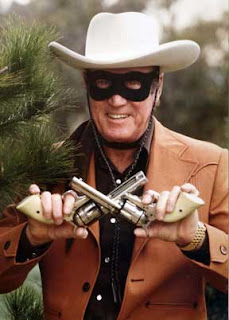 The best part of all of that publicity, though, was that the original TV series was revived on cable and I was finally able to see hundreds of episodes!
In the late 1990’s, I was privileged to meet Fred Foy, the announcer on both the later radio series as well as the now-classic television version. My wife and I had dinner with him one evening. Mainly, we discussed his time as announcer on THE DICK CAVETT SHOW in the sixties. The next day I got to appear on stage with him in a re-creation of a 1954 radio episode. The best part, though, was when I told him I loved the Lone Ranger so much at age 16, even though I'd never seen a lot of episodes, that I broke into my own house to watch it! 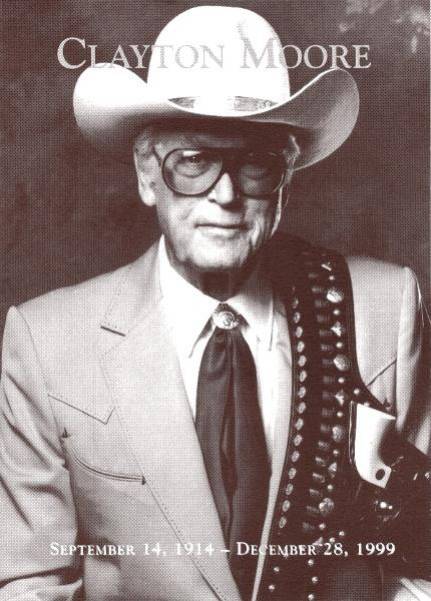 Posted by Booksteve at 5:28 PM